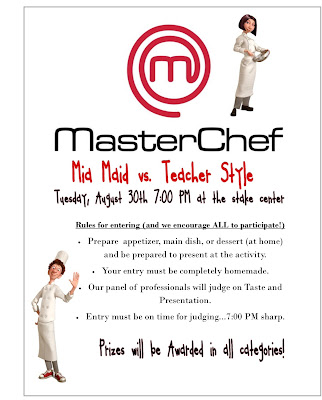 Our youth (and their leaders) loved this Master Chef night!  And almost every young man and young woman participated.  Especially in the eating part. 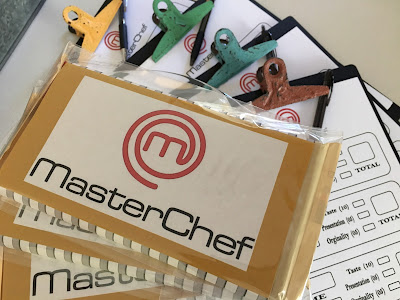 We invited official judges.  And as the flyer explains, asked each person to bring an appetizer, entree or dessert.  They were to create their entry at home and bring it to the activity ready for judging. 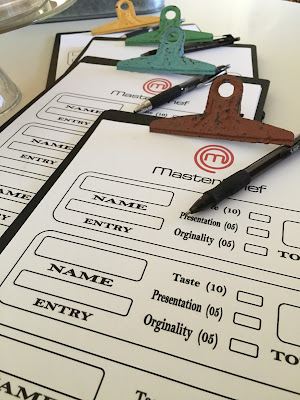 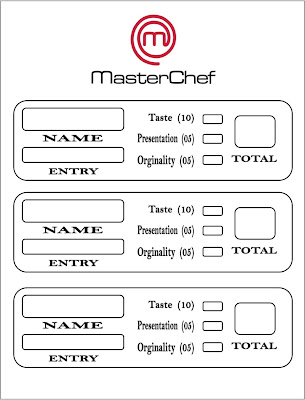 We were treated to lots of extraordinary dishes. 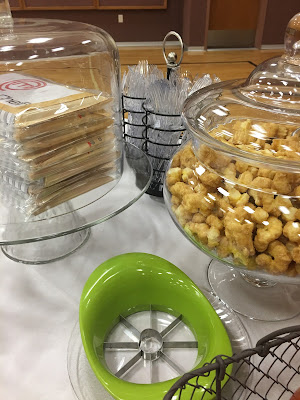 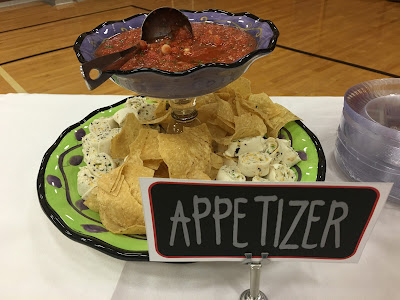 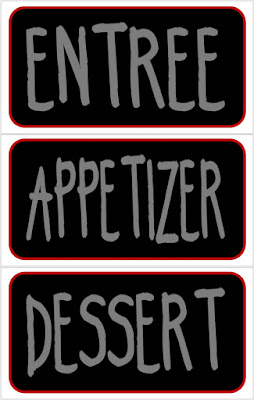 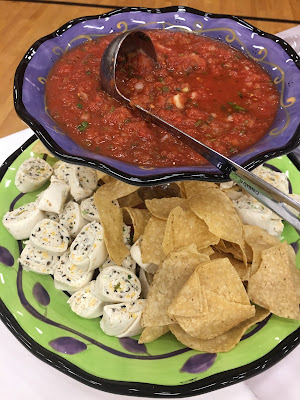 My daughter tried her hand at making the delicious appetizer, Tortilla Pinwheels.  She added fresh salsa and chips to the dish and won first prize in her division. 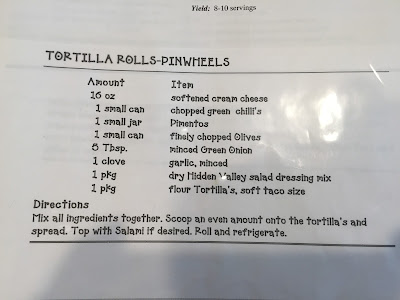 Store the pinwheels in refrigerator and then cut right before serving. 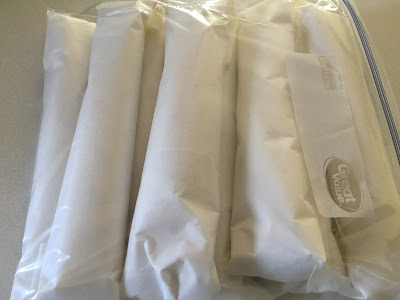 At the last minute I decided to bring some fresh picked honey crisp apples (my favorite) and some Carmel Toffee dip.  This recipe is so fast and so delicious. 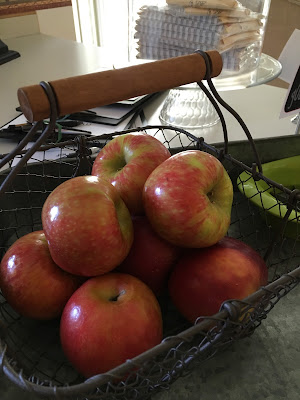 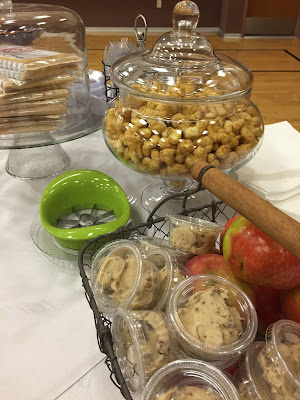 As you can see in the picture I decided that instead of worrying about double dipping I portioned the dip into single serving plastic cups (found at Wal-Mart). 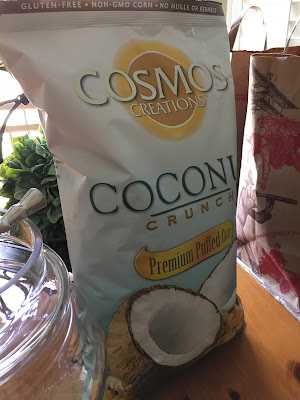 Another great find was this Coconut Crunch from Costco.  Light coconut taste.  So good. 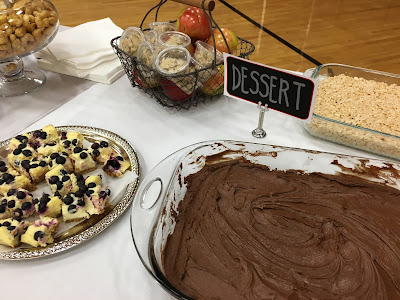 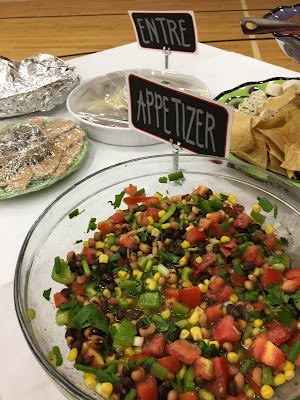 Before the judging began we split the group in half and had them sit at two tables for the Master Chef  Challenge. 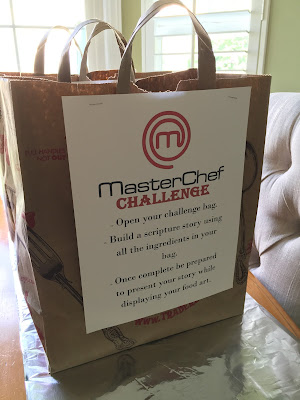 One bag was filled with savory ingredients, the other with sweet. 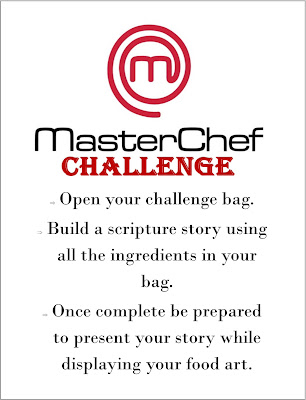 The story boards they came up with were hilarious!  See if you can guess what this scripture story is? 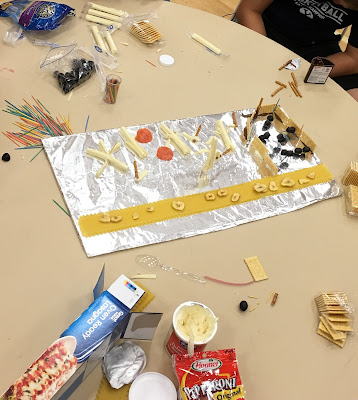 Need a few hints?  The gumby looking character holds a sword (pretzel rod) and shield (pepperoni).  You will also notice that there are several arms (string cheese) laying on the ground with little black sheep (olives and toothpicks) in the corral.  Need anymore guesses?  Does Ammon and King Lamoni's sheep sound familiar?

The long lasagna noodle is the road with banana pebbles on it.  Those guys are so clever! 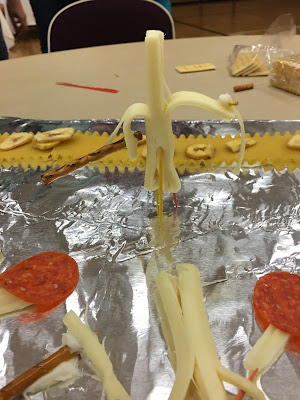 The young women decided they would create a large boat with animals boarding two by two.  The boat was constructed out of Oreos, gum drops for the mast and animals, and red vine strings for the red (?) water.  They also used pretzel sticks for the boarding ramp.  Once again...clever. 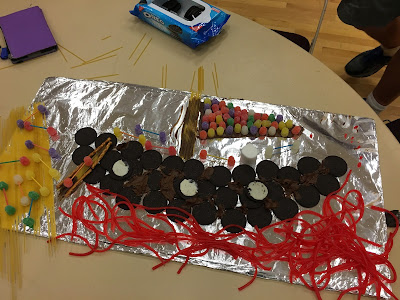 Now back to the judging! 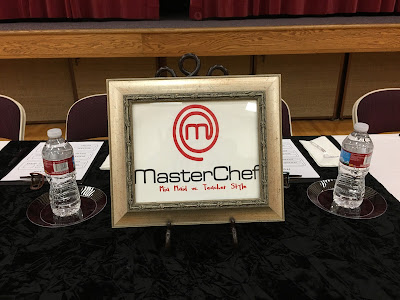 Each person that brought an entry was asked to stand in front of the judges and explain what their dish was and how they made it.  Now that was quite comical at times! 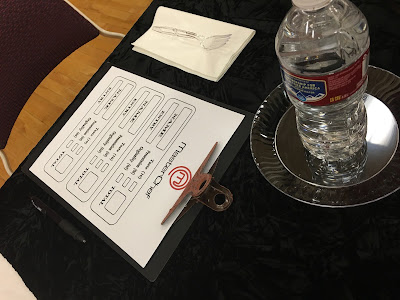 After the judges listened, tasted and marked the judging sheet, the head judge stood and announced the winners and gave them their Gold Bar Award.  (A Symphony Bar with custom wrapper) 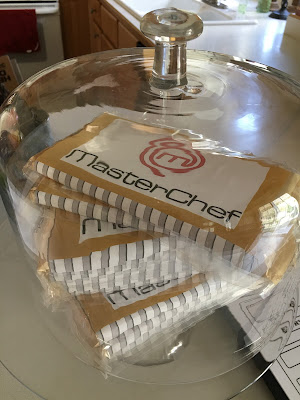 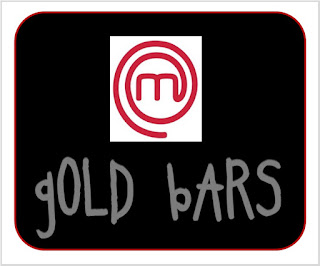 After the judging, all were invited to sample the entries for refreshments.

If you are interested in any of the templates for this activity, just right click on picture then copy and paste into your program. 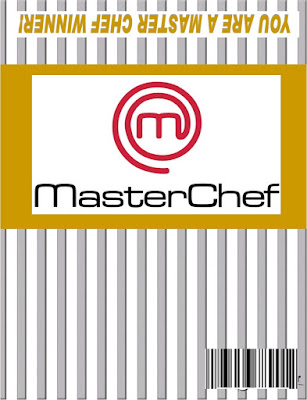 Our youth are so much fun!

Posted by Chocolates for Breakfast at 7:00 AM