Neighbor gifts 2015 and the Jello Story

Our neighbors and friend gifts for Christmas this year were simple, but meaningful to us. The story is a very special one, especially for us this season. Our son is serving a mission in Buenos Aires, Argentina. It is his first Christmas away from us. This story touched my heart so much. I wanted to share it with you.

It was but a few short days until Christmas in 1966.  Two young elders of the Mormon Church walked the streets of Laredo, Texas, knocking on doors in search of someone who would listen to their gospel message.  No one, it seemed, in the entire city had time to hear the teachings of the Savior, so intent were they that the celebration of His birth should suit their own social purposes.

Filled with discouragement, the two young men turned their backs to the approaching twilight and began the long walk home.  Retracing their steps of the afternoon, they came upon a low, windswept riverbank.  Jutting from its brow stood the barest means of a shelter, constructed of weathered wooden slats and large pieces of cardboard.

Strangely, they felt moved to go to the door and knock.  A small, olive-skinned child with tangled black hair and large dark eyes answered.  Her mother appeared behind her, a short, thin woman with a tired but warm smile.  In her rich Spanish accent she invited the young men to come in and rest awhile.

They were made welcome and seated on the clean-swept floor.  The little one-room shanty seemed to be filled with shy, smiling, dark-eyed children.  The mother proudly introduced each of them - eight in all - and each in turn quickly bobbed his or her head.

The young men were deeply moved at the extreme poverty they saw.  Not one in the family had shoes, and their clothes were ill-fitting and in a condition beyond mending.  The walls of the little home showed daylight between the wooden slats, and eight little rolls of bedding were pressed tightly into the cracks to help keep out the draft until they were needed for sleeping.  A small round fire pit dug in one corner marked the kitchen.  An odd assortment of chipped dishes and pots were stacked beside an old ice chest, and a curtained-off section with a cracked porcelain tub served as the bathing area. Except for these, the room was barren.

The mother told how her husband had gone north to find employment.  He had written that he had found a job of manual labor and that it took most of his small wage to pay his board and room.  But, she told the young men, he had managed to save fifty cents to send them for Christmas, with which she had purchased two boxes of fruit gelatin.  It was one of the children's favorites and would make a special treat on Christmas day.

Later, long after the young men had left the family, they still asked each other incredulously, "Fifty-cents? ... Fifty cents for eight children for Christmas?"  Surely there must be something they could do to brighten Christmas for such children.

The next morning, as soon as the local shops opened, the young men hurried to the dime store and purchased as many crayons, cars, trucks, and little inexpensive toys as they could afford.  Each was carefully wrapped in brightly colored paper and all were put in a large grocery bag.  That evening the two young men took their gifts to the shanty on the riverbank.

When they knocked, the mother swung the door open wide and invited them in.  They stepped inside and in halting Spanish explained to the children that they had seen Santa and he had been in such a hurry he'd asked if they would deliver his gifts to the children for him.

With cries of delight the children scrambled for the bag, spilling its contents upon the floor and quickly dividing the treasured packages.  Silently the mother's eyes filled with tears of gratitude.  She stepped forward to clasp tightly one of each of the young men's hands in hers.  For long moments she was unable to speak.  Then, with tears still welling from her eyes, she smiled and said, "No one ever has been so kind.  You have given us a special gift, the kind of love that lights Christmas in the heart.  May we also give you a special gift?"

From the corner of the room she drew out the two small boxes of fruit gelatin and handed them to the young men.  Then all eyes were moist.  All knew the true meaning of giving, and none would forget that at Christmas the greatest gift of all was given. 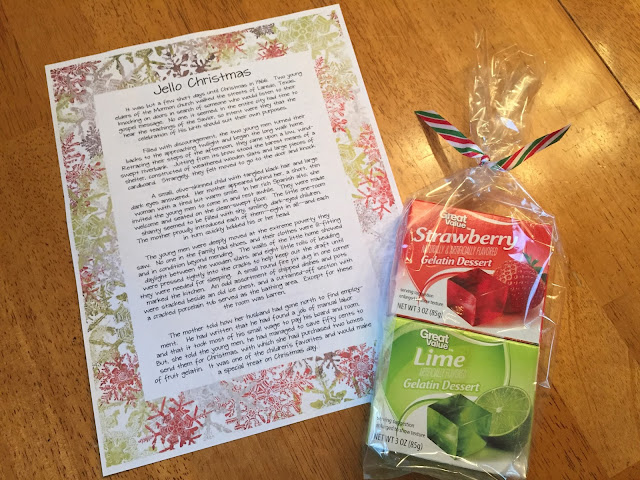 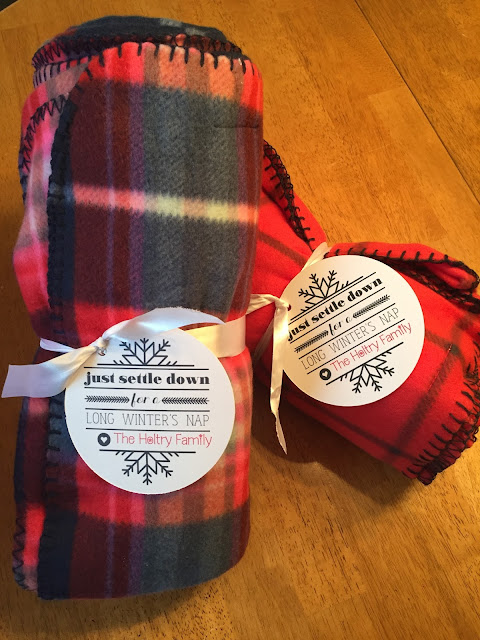 If you would like to print a copy of the story, here you go! Just click on the pictures and save! 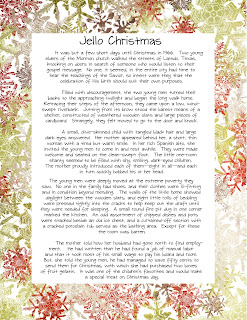 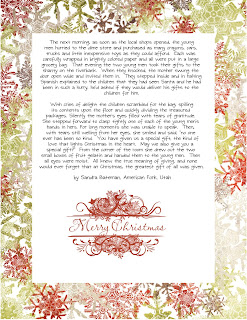 Posted by Chocolates for Breakfast at 9:44 AM